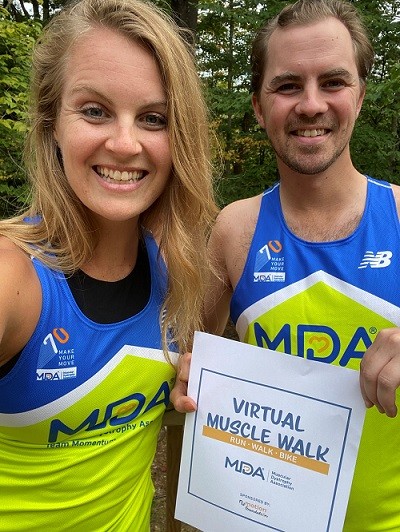 Keegan and his fiancé, Sarah, started their relationship on the seacoast of New Hampshire four years ago and currently live in Kittery, Maine. Keegan was diagnosed with Muscular Dystrophy in 2008, at the age of 18. Muscular Dystrophy was not new to the Kilroy family as Keegan's father, Tim, also has the disease.

When he was diagnosed, Keegan was a freestyle skier competing in events around the world. The disease ended Keegan's freestyle skiing career, however, he has found a new passion in the game of golf. When not working as an electrical engineer, Keegan can be found at the golf course. He is currently ranked 161st in the World Rankings for Golfers with Disabilities and competes in tournaments across the country.

Neuromuscular diseases are also not unfamiliar for Sarah. Her grandfather died from ALS when she was young. Years later, a family friend was also diagnosed and lost his battle with the same disease. She participated in fundraisers and awareness for ALS throughout college.

Sarah is a pediatric speech language pathologist in Maine and a registered yoga teacher. Working together, Sarah and Keegan have found ways to adapt different yoga positions and flows to allow Keegan's body to maintain flexibility and strength. Sarah's passion is in meeting people where they are and making connections with them so as to give them a safe place to grow and realize their potential.

Keegan and Sarah are certainly not in this alone as they have an awesome team with them and an unwaveringly supportive community. Keegan's sister, Dr. Elisabeth Kilroy, researches muscular dystrophy at Nationwide Children’s Hospital in Columbus, Ohio. And when Keegan and Sarah built their house last year, it was designed for Keegan's dad to live with them. He is always offering insights to his experience of living with the disease and helps ease some of the worries of the unknown progression.

It has been their family, friends, and the community that have been the biggest help. From the telethon to shamrocks, from muscle walks to summer camp, from a helping hand to an ear to listen, friends and family have always been there.

Muscular Dystrophy is interwoven into Keegan and Sarah's lives from many different angles. As they continue to navigate its' effects on their family and wait for a cure, all they can do is live by their family motto "Adapt and Overcome". They are extremely humbled to be asked to be this year's honorees and hope to continue to be integral members of the MDA Team Momentum

Hey! Jon & Stephanie Betts here! We are the parents to three awesome kids, 10 year old Grace, 9 year old Claire, and 8 year old Henry, who was diagnosed with Merosin-Deficient Congenital Muscular Dystrophy as a newborn. We were first introduced to the Muscular Dystrophy Association soon after Henry’s diagnosis. Not long after that, our great friends Kim Kreiling and Steve Jenkins approached us about forming a group in Henry’s honor as Team Momentum was created. Henry’s Heroes has been active ever since and we are so happy to once again be involved with Team Momentum for the Chicago Spring 13.1. Jon and I have now run a combined eight half marathons for the MDA. While the course’s wonderful sites, amazing crowds, and tremendous post-race festival have helped to make the Chicago Spring 13.1 such a great event, it’s the MDA staff & volunteers, the Team Momentum runners, and many honored families that truly make this such a special experience every year. Having the opportunity to contribute and participate continues to fill us with joy and hope every spring.

In 2019, Henry was invited to be the race ambassador. Although a public-speaking debut in front of a few thousand runners may have been a bit overwhelming, he managed to squeak out a quick “Good Luck!” and give dad a high-five at the starting line. Seeing all of the runners as they headed out onto the course, particularly with so many Team Momentum jerseys, was so inspiring and it was an honor to hold the finish line tape as the first runners came in.

We can’t begin to fully express how much this organization means to our family. We feel so fortunate that the Muscular Dystrophy Association is the official charity partner of the Chicago Spring 13.1. Seeing those Team Momentum runners inspires and fills us with hope. Together, we are progress.